skip to main | skip to sidebar

My New Book of Essays 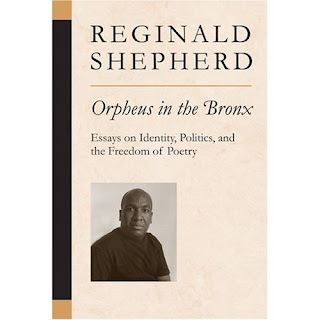 My first book of prose, Orpheus in the Bronx: Essays on Identity, Politics, and the Freedom of Poetry, is just out in the University of Michigan Press Poets on Poetry series, and I have to share the news. This is a project on which I’ve been working for several years, and I’m incredibly excited that it’s finally come to fruition. I got my advance copies about a week ago and have been cradling the book in my arms as if it were my baby. Which it is.

Noted poet and critic James Longenbach generously writes on the back of the book that “Orpheus in the Bronx not only extols the freedom language affords us; it embodies that freedom, enacting poetry's greatest gift—the power to recognize ourselves as something other than what we are. These bracing arguments were written by a poet who sings.” I’m grateful to him for the wonderful endorsement.

The essays in Orpheus in the Bronx argue against ideological evaluations of art as either bourgeois mystification or social critique, focusing on the one hand on the liberatory possibilities of the autonomy of art and on the other hand on art’s relationship to social context and particularly to questions of social identity. For some time it’s been the fashion to see literature as a social symptom, or at best an epiphenomenon, to think that social conditions and social identity completely determine the nature and value of a piece of writing. But art’s utopian potential lies exactly in the degree to which it exceeds social determinations and definitions, bringing together the strange and the familiar, combining otherness and brotherhood.

The book includes, among others, a piece on the imbrication of homosociality and homosexuality in the libidinal economy of Jean Genet’s novel Querelle; an essay on Jorie Graham’s book Erosion which interweaves an admiring discussion of her poetry’s traversal of intellectual boundaries with a critique of the problematic relations between art and politics that her poetry often enacts; an essay arguing against the imposition of ideological or political agendas, particularly those of identity politics, on poetry; a somewhat polemical survey of the contemporary American poetry scene’s still all-too-operant binary between “mainstream” and “avant-garde” poetry which proposes the possibility of a third mode that I call, after Wittgenstein, lyrical investigations; an essay exploring the relationships of perception and conception, presence and representation, force and form in the work of Wallace Stevens; and “To Make Me Who I Am,” a longish, more personal piece on my development as a writer and a thinker, starting with my childhood in the tenements and housing projects of the Bronx. (An abridged version of this piece appears in the January/February issue of Poets and Writers Magazine.) The book also includes appreciations of individual writers whose work has meant much to me, including Samuel R. Delany, Alvin Feinman, and Linda Gregg. It concludes with an essay called “Why I Write,” which originally appeared on this blog, in which I lay out some of my motivations and ambitions as a writer, including the perhaps unfashionable desire to live forever in some form.
Posted by Reginald Shepherd at 8:18 AM

Reginald--I've had your book of essays on order since December. Sounds like it should be arriving in my mailbox any day now. I pre-ordered after reading your excellent essay in P&W. I then wrote about the essay on my blog. I'm looking forward to reading the other essays.

My professor brought this book to my attention and I am looking forward to reading it. In addition to completing my MFA in June, I run a space in the Bronx called BAAD! The Bronx Academy of Arts and Dance. As a Bronxite, I get great pleasure in learning of writers (especially writers of color and queer writers). I look forward to reading your book(s) and would like to see how we could have you up at BAAD! I will be in touch.

Buy it here and here.

Orpheus in the Bronx

Buy it here and here

Reginald Shepherd
Pensacola, Florida, United States
Reginald Shepherd is the editor of The Iowa Anthology of New American Poetries (University of Iowa Press, 2004) and of Lyric Postmodernisms (Counterpath Press, 2008). He is the author of: Fata Morgana (2007), winner of the Silver Medal of the 2007 Florida Book Awards, Otherhood (2003), a finalist for the 2004 Lenore Marshall Poetry Prize, Wrong (1999), Angel, Interrupted (1996), and Some Are Drowning (1994), winner of the 1993 Associated Writing Programs’ Award in Poetry (all University of Pittsburgh Press). Shepherd's work has appeared in four editions of The Best American Poetry and two Pushcart Prize anthologies, as well as in such journals as American Poetry Review, Conjunctions, The Kenyon Review, The Nation, The New York Times Book Review, Ploughshares, Poetry, and The Yale Review. It has also been widely anthologized. He is also the author of Orpheus in the Bronx: Essays on Identity, Politics, and the Freedom of Poetry (Poets on Poetry Series, University of Michigan Press). Shepherd has received grants from the National Endowment for the Arts, the Illinois Arts Council, the Florida Arts Council, and the Guggenheim Foundation, among other awards and honors.